This site uses cookies to improve the user experience and advertising. Essential cookies will always be enabled. Learn More

Explained: What is NFT?

NFT is the new buzzword in Tech world. But what is it exactly? In this article, I am trying to explain it in simple terms.

I believe it will be easier to understand if we compare NFT with the equivalent physical world objects. Imagine a piece of art like a painting. If you want to buy a painting, you will be dealing with the person or entity who is the current owner of that piece of art. Once you buy the painting, the actual proof of ownership will most probably be a separate document than the actual piece of art you own.

The ownership will also have its own terms, for example, you will be allowed to exhibit the painting wherever you want, but will not be able to reproduce it or copy it, or maybe not resell it etc.

It is also worth noting that while owning a painting does not give you much utility value and is an expensive affair, there are other things you own (like a car) which also have a similar kind of ownership process (where you have a proof of ownership with some associated terms).

Coming to virtual properties (like a song or a digital art) which are mostly stored in digital form, there is no authentic method to associate the ownership information with it, until now. That is the problem NFT is (trying to) solve.

OK, but what does it mean?

NFT is a digital property along with its ownership information protected and verified using Blockchain technology.

As the name suggests, non-fungible means NFT cannot be replaced with a different NFT of same value, like currency or Bitcoin. Each NFT is unique in this way. And since the ownership information is verified and protected using blockchain, you can make sure that you “own” the actual digital property, even though the actual property associated with the NFT (like a music file or image file or even a tweet or article like this) can be copied and reproduced, you will still be able to prove your ownership.

So NFT is a technology, and not cat gifs?

NFT is a really new and novel use of blockchain technology. And since it is new, the initial hype about NFTs come from the fact that several “art forms”, many of which were cat memes, were sold online for obscene amount of money. But NFT can be technically applied to anything digital.

For instance, Jack Dorsey, former Twitter CEO, sold his first tweet as an NFT for an amount of $2,915,835.47. You can see the NFT sale in the Valuables platform. You can view the tweet on the Valuables site as sold 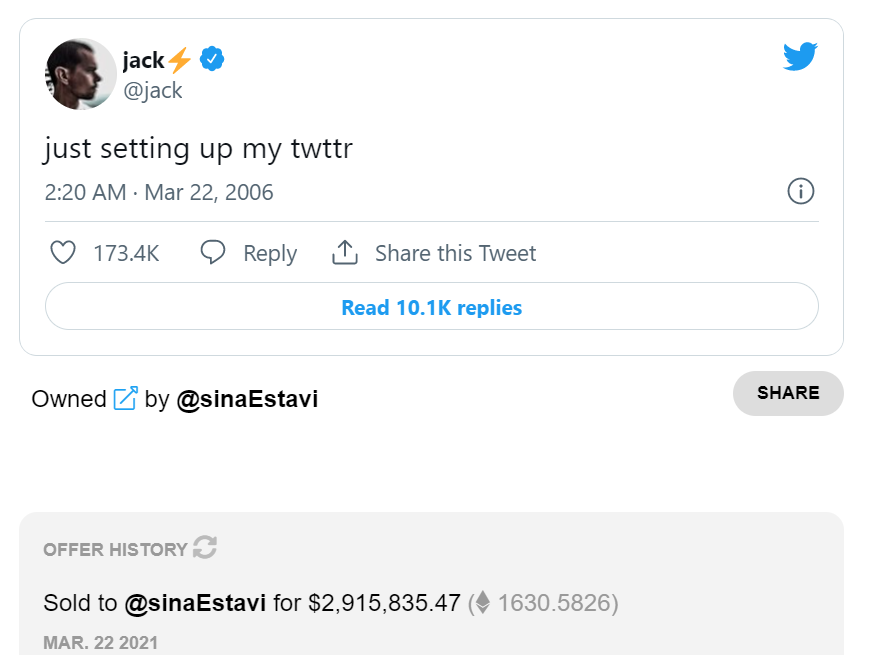 The same tweet is available for anyone to access and most probably will be public as long as Twitter servers are live, but what is transferred here, according to the Valuables FAQ, is:
“a digital certificate of the tweet, unique because it has been signed and verified by the creator”.

How is NFT created?

NFT is a part of the Ethereum Blockchain. You might have already heard about Ethereum cryptocurrency, but its blockchain also supports NFTs, which will be storing some extra information than Ethereum coin

Even though Ethereum was the first one to implement NFT, there are other blockchain technologies already supporting NFTs.

What else can I buy as NFT?

Literally any digital property anyone want to sell as an NFT. As of now most of the NFT space is occupied by “Art collectors” who are looking to invest in digital artforms, either as an investment or because they are fond of that art, like mentioned above about Jack Dorsey, you can buy anything which is on offer

Can I sell my artwork as an NFT?

Yes, you can, with a little bit of help from platforms like valuables. NFTs even have a feature where the original owner gets paid a fraction of the price whenever the ownership changes.

Are all NFTs really unique?

While technically every NFTs are unique, you can design NFTs to be of a finite variant, like a collector’s edition comic, or a limited-edition watch.

Can I buy physical objects as NFT?

There have been some attempts to tie NFTs with physical objects. Nike has patented a method to verify sneakers’ authenticity using an NFT system, which it calls CryptoKicks.

Since all of this is still at a nascent stage, its worth following this trend to see where this goes.

There are several marketplaces popping up to buy and sell NFTs. Some of these are OpenSea, Rarible, and Grimes’ choice, Nifty Gateway.

What is with NFTs and Kittens?

One of the first use of NFT was in a game called CryptoKitties that allowed people to buy and sell virtual kittens. That is what made NFTs popular initially.

Can NFT be stolen?

One thing about blockchain is that it makes it incredibly hard to tamper with. But there have been many instances where the physical devices (like hard drive) which stored the Crypto wallets were stolen, or the private keys for wallet were stolen to steal cryptocurrency. In a similar way, NFTs can also be stolen. But till now there is no news about a high-profile theft of NFTs.

Is there any downside to NFTs?

Like much of the cryptocurrency world, NFTs also uses blockchain, which is very energy hungry and generate a lot of greenhouse gas and use a lot of electricity. This could be one of the major hurdles which this technology should overcome in order to become mainstream. Hopefully in near future more and more technological innovations will enable us to use this tech in scale without worrying about its carbon footprint.